Where did the month of May go? The time has flown by. We finally finished the pigs after nearly two weeks of breaking down meat and getting items ready for the freezer in the evenings after work. That was some real work! We thought this would be the easy part but it was one of those things that had to get done and we could only do it after work. Needless to say, those were very long days. But we ended up with 285 pounds of pork in our inventory and over 200 packages of meat. Since it is just the two of us, we tried to keep things in relatively small portions, enough for just two to four people.

We have steadily bartered for some nice items and have enjoyed having all this fresh pork around. There certainly is something very gratifying in a full freezer of meat you butchered and prepared yourself. Our first batches of bacon have been delicious! The pigs even left us of lots of nice looking veggie plants in the dirt where they lived.

We’ve been a little disappointed in the garden so far this year. In our excitement of having the raised beds and fresh compost w

e eagerly planted things, but did not test the soil and it now appears we have some nutrient deficiencies and our veggies just are not getting there. We are upping our watering routine and trying to keep a close eye on things, but have not been able to eat anything out of the garden yet this year except for a couple of peas. We did get a fence around it which looks great and is doing a good job of keeping away the chickens, ducks and deer. 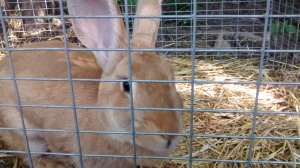 Sadly, we lost three bunnies. We thought it was an early heat spell where we got to just over 90 degrees, but after three died in a row in two days we think it was some sort of disease or virus. We got the last two moved away from where the others were and each other and they seem to be happy and healthy.

The ducks are super sweet and appear to have begun trying to mate. They are just over four months old so it will be awhile until we get eggs and possibly

little ducks, but we are hoping they will all come. We ended up with three sets of male and females, but we butchered two of the males yesterday. They were beginning to be aggressive so after a tough decision it was decided to butcher two of them. We chose the rouens so we have one pekin male now. I am happy to have been at work while this occurred because I was sad to see them go.

As usual it is never a dull moment on the homestead, and our days have been full of hard work and lots of fun. I am looking forward to my Summer break from work and devoting myself full-time to backyard fun and lots of time outdoors. Michael reminded me today it has been way too long since our last update, so we hope to post more about the farm and work more on our site very soon.

Day to Day on the Homestead

Two plant geeks, one-tenth of an acre and the making of an edible garden oasis in the city

Spreading the permaculture word - Create your own environment!

When Did This Become a Farm?

Homesteading, Homeschooling, and Homemaking in the PNW

Bee-friendly farming for a sustainable tomorrow.

From a scrappy 1/4 acre to a homestead on more! Livestock, gardening, meat, wool, eggs, dairy, DIY projects, and life from scratch.

Blogging about my life in Wild, Wonderful, West Virginia.

My Site
Tiny House Of Our Own, Gypsy Style

Life on the homestead with a librarian and a chef.

Raising Meat Rabbits To Save The World!

The Self Sufficient HomeAcre
living on a green thumb